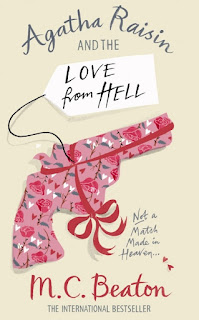 The honeymoon is most definitely over for Agatha Raisin and her new husband, James Lacey. It's only been a short time since their wedding--and already they aren't getting on. But his wandering eye and her god-awful housekeeping are the least of their problems. Just days after a very public, very ugly marital row, James disappears--and when his mistress is later found murdered, he's the prime suspect. Agatha just doesn't, buy it. Sure, he's a liar and a sneaky, low-down cheat. But a murderer? That's bloody impossible! And as some speculate on the role Agatha may have played in his vanishing, the forever feisty Mrs. Raisin must piece together the most unsavory parts of the dead woman's past to clear James's name--and her own...

Agatha and James are finally married! But after few days, Agatha is already bored and unhappy. James is different to what she expected and they spend their time arguing. Agatha is jealous that James spends time with Melissa. Everything becomes worse when Melissa is murdered and James injured and missing. Agatha decides to investigate, find the murderer and bring James back home.
Agatha et James sont finalement mariés. Mais après quelques jours seulement, Agatha s’ennuie et n’est pas heureuse. James est différent de ce qu’elle espérait et ils passent leur temps à se disputer. Agatha est aussi jalouse que James passe du temps avec Melissa.
"It was supposed to be the end of a dream - the perfect marriage. Here was Agatha Raisin married to the man she had longed for, had fantasized about. Her neighbour, James Lacey. And yet she was miserable.
It had all started with one incident two weeks after they had returned from their honeymoon. The honeymoon in Vienna and then Prague had been taken up with sightseeing and sex, and so no real day-to-day life together had really bothered them. Agatha had kept her own cottage next door to Jame's in the village of Carsely in the Cotswolds. The idea was to make it a thoroughly modern marriage and give each other some space.
Sitting now in her own cottage cradling a cup of black coffee, Agatha remembered the day it had all begun to go wrong."
Et tout devient pire quand Melissa est assassinée et James, blessé, et porté disparu. Agatha se lance dans l’enquête pour retrouver le meurtrier et ramener James à la maison.

This is an investigation that is a bit different because Agatha and James are directly involved. James is a character that I like less and less after every book. Agatha makes me laugh a lot and Charles remains my favourite!

Cette enquête est un peu différente des autres car cette fois, Agatha et James sont directement touchés. Coté personnage, j’aime de moins en moins James. Agatha me fait toujours autant rire :
“Turn next right, Aggie.”
“I thought for a while you’d given up calling me Aggie. I wish you wouldn’t. Every time you call me Aggie, I feel as if I ought to be standing at the doorway of a terraced house in a mining area in some northern town with my hair in rollers, wearing a chenille dressing- gown and fluffy slippers, and with a cigarette stuck in my mouth.”
“Sounds like you.”
Charles reste mon personnage préféré :
“Let’s grab a bite to eat. Give me some money, Aggie, and I’ll get it.”
“No,” said Agatha. “You get it.”
“I told you, I forgot my wallet.”
She leaned across quickly, thrust her hand inside his jacket, and pulled oud his wallet. “There you are.”
“Bless me, I was sure I had forgotten it.”
“Good try, Charles. Get food.”

The investigation is well written, suspense present and as always I didn’t suspect the right person! I can’t wait to read the 12th book.